​The Andover Town House is a historical and unique venue for your event. It is fully air‐conditioned and handicap accessible throughout.  It is an accessible and affordable venue for a wide variety of events from weddings to anniversary parties, concerts to fundraisers.

With a seating capacity of 150 people for a sit down dinner, or 200+ for cocktail  and theater style functions, the possibilities are endless.
Renovations were completed in the fall of 2017 so you can enjoy a fresh new look! 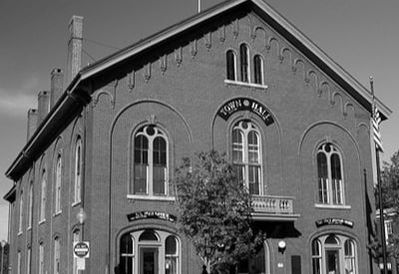 The Andover Town House was built in 1858 for a total cost of $15,000. The building was originally constructed to accommodate the need for a large location in which to conduct Town business. Years ago there was a Post Office (just as today), a barbershop, lawyers’ offices, a courtroom, and a police station with holding cells in the basement.

The second floor function hall was designed to hold Town Meeting and other organizational meetings.  In addition to parties and dances, political rallies and school graduations were once held in the Town House. A quarter of a century after the hall was built, an extension was added to the building.  The 1882 renovation added anterooms, cooking facilities, running water, and many other amenities.

​A second addition to the hall began in 1902. It was during this construction that the main lobby, the tile mosaic depicting the Andover Town Seal, and the two ornamental winding staircases were added. Following a $2 million renovation in 1989 the second floor hall once again became a popular meeting place for the residents of Andover and surrounding communities.